B Is for Belief 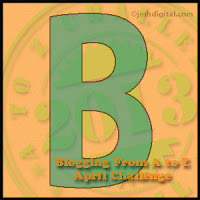 Today's "A to Z Blogging Challenge" brings us to the letter B. And I knew I'd blog on belief, but this post has taken a bit different direction.

Through most of my preteen and teenage years, I rejected the compliments I received. And I didn't realize the damage I was doing to myself. It's only now as an adult that I know I have reaped as I have sown — I long watered the seeds of negativity spoken into my life or the weeds of self-deprecation that I had allowed to creep into my thinking. I have had an entire garden of weeds to pull up; some of those negativity-plants have had long, stubborn roots that required more than just a quick jerk to pull up out of the soil of my thinking.

I'm not sure why believing compliments that others have given me through the years has been so hard for me. Am I too sensitive? Perhaps so.

Do I consider those who have complimented me to be liars? Well, no, I don't. Do I think they're deluded about me? Not exactly. Then if they are telling the truth about what they see in me, why don't I believe those statements? Why don't I let them take root in my life?

Even more important to ask: why do I more readily believe criticism, especially the discouraging kind?

It's as if one takes the comments — whether merely offhand or intentional — and nourishes them as gardener would do with a cherished plant, hoping for a beautiful bloom to burst forth in the spring. But those criticisms do not produce beautiful blossoms, especially when magnified beyond whatever aspect was meant as constructive feedback. Ugly comments spoken in mean tones can become weeds — even invasive species — to the person who is too apt to believe them.

Nurturing negativity in your own life is all about what you're choosing to believe. That's one of the numerous truths I've learned since becoming a Christian.* And the good news (other than Jesus' birth, life, death, and resurrection and what all those events mean for humankind) is that I now know I have freedom — to believe that I have worth... and a worth that I don't have to drum up from inside. I don't have to try to manufacture it on my own. That sense of worth comes from knowing that not only am I a cherished creation of my Heavenly Father but also that I am His child.

His love frees up me up to believe what He says about me, and He gives me not only the will to pull up the lie-weeds in my mental garden but also the strength to do so. And the perseverance to keep going back to His Word and sowing those truth-seeds and watering them in my life.

* I have a blog post drafted in which I tell my story. When I publish it, I'll link to it here on this one.
Posted by Elena at 8:24 PM

Elena
Nashville, Tennessee, United States
A writer, a poet, a dreamer... a lover of words, beautiful things, and oddities. A brown-eyed, raven-haired curvy gal growing to be the woman God's making her to be. Twitter: @ElenaSings